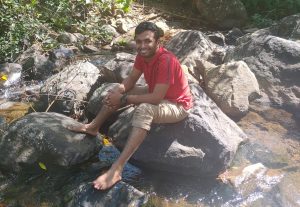 My research interests broadly lie in Complex Analysis. Currently, I am studying one point one degree quadrature domains in higher dimensions and their properties. In a joint project with Jaikrishnan, I am studying proper holomorphic mappings between domains in several complex variables (SCV). I am also exploring the interplay between SCV and Teichmüller theory with Chitrabhanu.

Lecture notes by Chitrabhanu from the lectures given in the Teacher's training program organized from November 28, 2019 to December 01, 2019 at Kerala School of Mathematics.

Video Lectures on the web

I have compiled below a few of my favourite video lectures found in the web.

Dr. Pierre Albin from the University of Illinois at Urbana-Champaign has offered a course in Algebraic Topology. The course more or less follows the route taken by Allen Hatcher in his book "Algebraic Topology". The lectures can be found in the following link.

Lectures on the Geometric Anatomy of Theoretical Physics

Dr. Frederic P Schuller has delivered a series of lectures by the title "Lectures on the Geometric Anatomy of Theoretical Physics". The lecture series involves building the foundational mathematics needed for theoretical physics (which includes Classical Mechanics, Electromagnetism, Quantum Mechanics, Statistical Physics, Relativity). These lectures start from Logic and paves its way into Bundle Theory eventually. These lectures will be an excellent source to learn the material generally involved in a Topology and Geometry course in Mathematics. A link to the first lecture is given here.